How do I interpret the results of the Avatour Network Test?

The Avatour Network Test collects data on your network connection to validate compatibility with the Avatour platform. Technical personnel can use this article to interpret the results.

The Avatour Network Test displays six distinct widget panels that show various metrics about your network’s WebRTC performance. Some of these widgets aren’t relevant to our solution, so we will only describe the Video Quality, Bandwidth Speed, DNS Lookups and TURN Connectivity panels in this appendix. Some panels, such as the Location panel might be useful during troubleshooting, but the information is fairly straightforward. 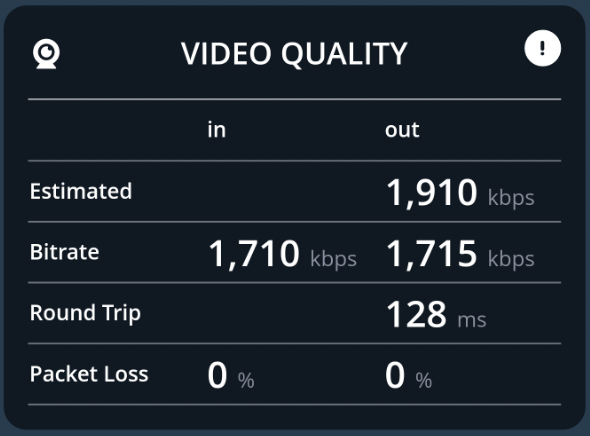 The Video Quality widget shows the relative performance of a video stream to our media servers. These are not absolute values, nor do they reflect the actual bitrates you will encounter when streaming a high quality 4k stream, but rather they reflect a set of relative metrics that can be used to anticipate the quality of an Avatour session on your network. The bitrate metrics describe approximately how much data your network can transport to and from the Avatour network. The “Estimated” row indicates the estimated bandwidth rate and doesn’t necessarily reflect your ability to stream at the 5Mbps rate required for a high-quality 4k stream, but if this metric is under 500-800kbps then we can expect some video quality issues. The “Round Trip” metric indicates how long it took a packet of information to get to and then back from the Avatour network in milliseconds, and a high number here can create increased latency in the video feed. Ideally, this number will be less than 200ms (100ms up and 100ms back). “Packet Loss” indicates what percentage of information that was sent did not reach the destination. Over 4% in this row could lead to lost frames and downgraded, pixelated video.

The following table can be used to judge how well your network may perform during an Avatour session. 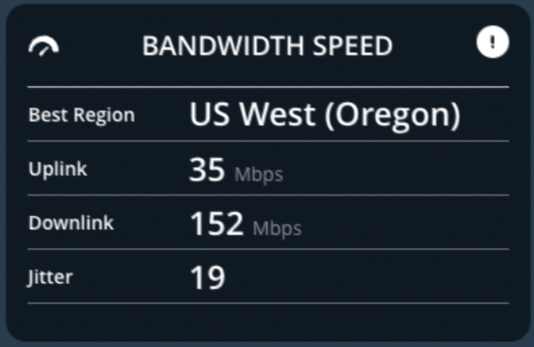 The Avatour Network Test provides a relative bandwidth speed metric based on the AWS region with the best route to your location. This metric provides the detected upstream bandwidth (labeled here as “Uplink”), downstream bandwidth (labeled here as “Downlink”), and jitter measured in milliseconds. Jitter is a metric that indicates the relative consistency of your connection to the region specified. This number does not reflect the actual latency of your connection, but rather the range between the highest and lowest response times between your network and the specified region. For i

nstance, if a regular ping from your network makes a round trip of 100ms on average (about 50ms there and then 50ms back), then a jitter metric of 20ms could indicate that, over a sample of many pings, the round trip time can fluctuate between 90ms and 110ms. Such a variance between packet transport times can cause certain issues with media relay. On a UDP based media stream,  packets are sent with no way of knowing whether they arrived or in what order. When there is jitter on the network, a packet that was sent first can actually arrive at the destination after a packet that was sent later on in the stream. This can affect the quality of the media stream when the jitter is high. Jitter, however, is par for the course when dealing with long distance network routes such as those found on the internet and so there are strategies in place to mitigate the impact of jitter on media streams. The most common strategy is the use of a jitter buffer that holds onto the packets that arrive within a given amount of time, usually 70 milliseconds, and puts them in the right order before releasing them to the application for playback. This means that a jitter metric under 70ms is well within acceptable limits and should not experience playback issues or much delay assuming your overall route latency is relatively low (under 200ms and displayed on the Video Quality widget). 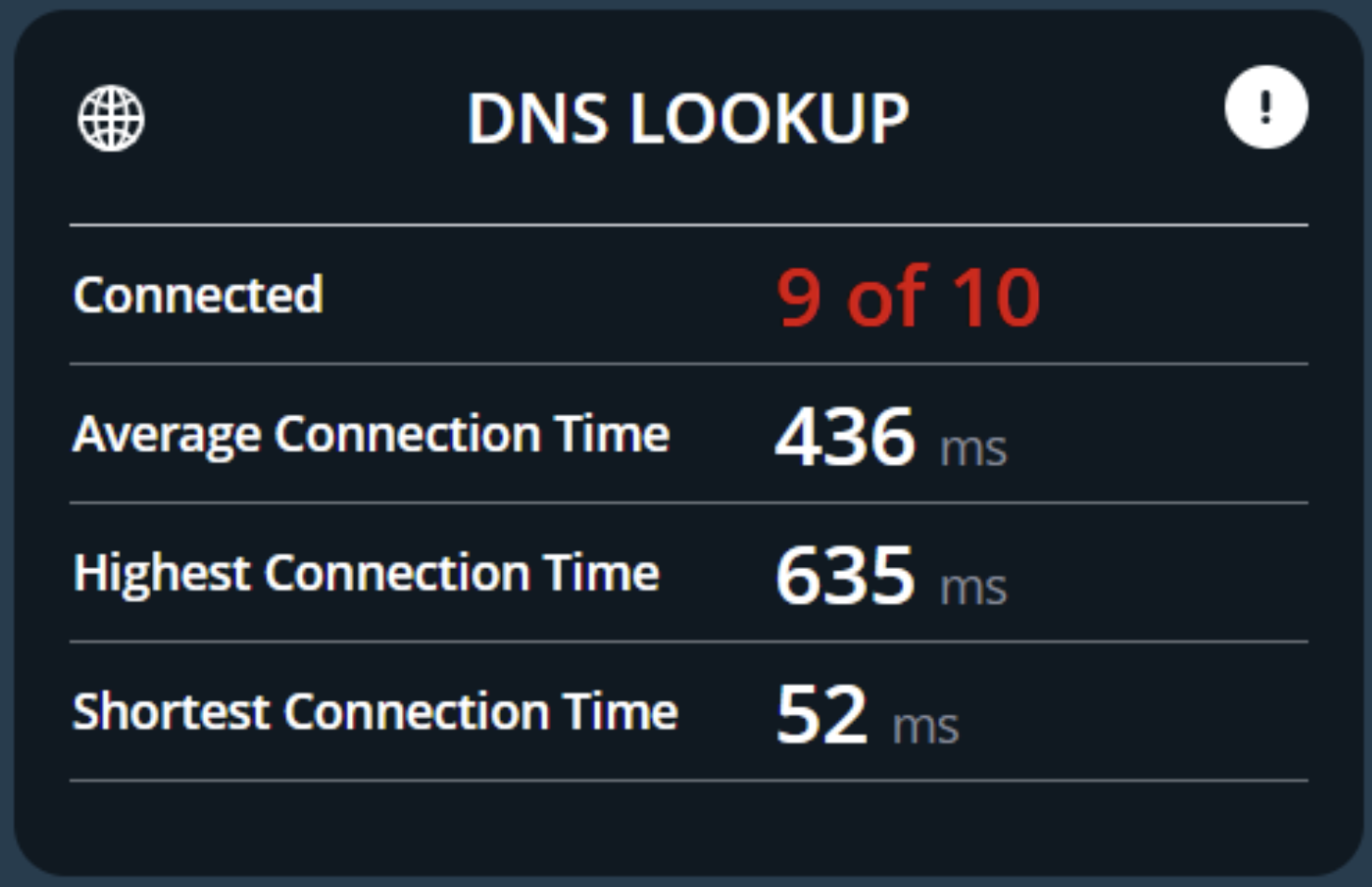 We integrate with a variety of services each using distinct domain names in order to provide the features that make Avatour such a powerful solution. These domain names map to IP addresses on our network using a public service called DNS or the Domain Name System. If your browser or device can’t access any of these domain names, then the Avatour system will not work properly, and so the DNS Lookup test determines whether any of our domain names are blocked by your network. If your DNS Lookup result indicates that all domains were reachable in the “Connected” row, then this test passed. However, if the results in this row are RED and some number of domains were not available, then you will likely have problems using the Avatour solution on your network.

The first thing to do in this situation is to open the logs for the test using the button in the upper right area of the results dashboard. This button likely has an exclamation mark badge indicating that the logs contain information about failures on the test. Click this button and the Log viewer opens. 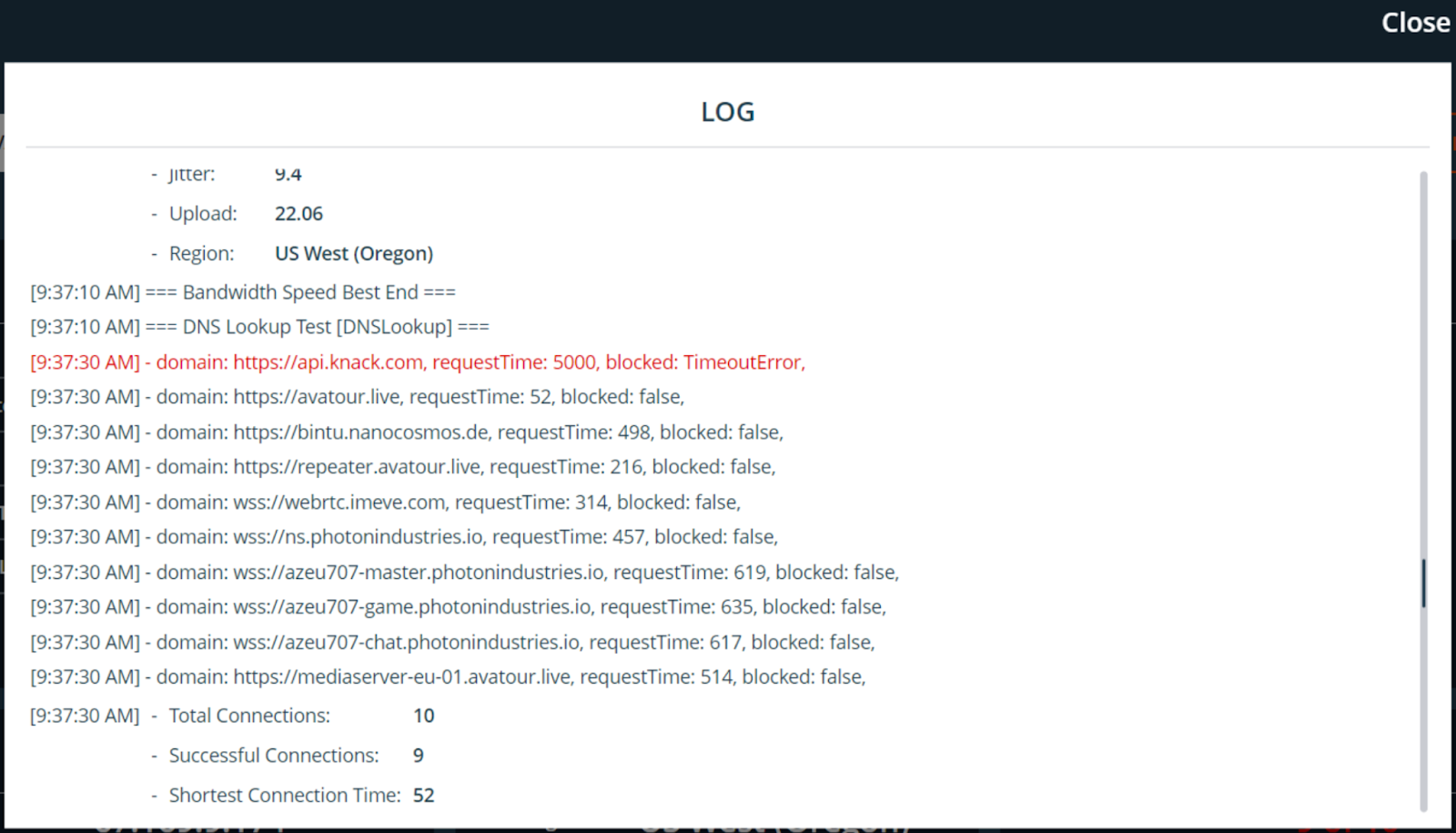 Using the scroll bar located to the right of the viewer, scroll through the logs until you find a line of red colored text that looks something like the above screenshot. Please copy and paste all red lines into an email to your network administrator or IT helpdesk and CC support@avatour.live to request an exception for these domains on your corporate web filter. Avatour support can help answer any questions they may have regarding the purpose for these domains and the kind of traffic being sent. 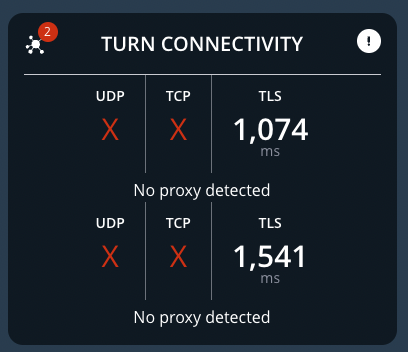 Avatour leverages industry standard ICE (Interactive Connectivity Establishment) methodologies in order to establish media connectivity through a variety of network topologies and equipment that provide NAT (Network Address Translation, essentially what lets you have many private computers behind a router with a single public internet IP address). ICE consists primarily of two protocols to assist in this effort known as STUN (Session Traversal Utilities for NAT) and TURN (Traversal Using Relays around NAT) and these protocols use the common port number 3478 (IANA registered) in order to negotiate connectivity. If you see something like the above image on your Avatour Network Test Results, then certain ports and/or protocols are being blocked on your network. Some corporate information security policies require blocking these ports which creates the situation shown above. For these cases, our TURN servers also use the common HTTPS port 443 over TCP as a fallback in order to negotiate a successful connection. So, even though your test results may show the above blockages, a successful video stream is possible because the TLS (443/TCP) protocol was successful.

That being said, 443/TCP (or 3478/TCP) is not our preferred protocol for a live, 4k stream and we recommend requesting an exception for any policies that may block 3478/UDP on your network firewall.

If all the listed protocols (UDP, TCP and TLS) show red X’s, then there are more strict security policies at play, such as domain or IP specific web filters, firewall rules, and even web proxies that will require a meeting between Avatour engineers and your InfoSec team to work out.